TV showrunners have a lot of work to do.We came into this blog with a pretty simple goal: To write a listicle about the five best TV shows taking on the climate crisis. A little less than a year ago, we created a similar list of must-see movies, and it turned out to be a big hit.We had no problem putting that blog together; there were plenty of great movies to choose from. So many in fact, that when we turned our attention to the small screen – but importantly, before we began our research – we set up a fun additional hurdle for ourselves: No docu-series expressly about climate change.

That meant fantastic shows like Years of Living Dangerously and Planet Earth II would have to sit this one out on the bench. That’s how confident we were that there’d be more than enough meaty dramas, reality series that touch on climate while being about something else entirely, and perhaps even a great sitcom or two tackling big issues in a lighthearted way (wherefore art thou, The Good Place or Superstore?) to choose from.

What we mostly found were crickets. There simply are not many TV shows out there incorporating, oh you know, the biggest crisis facing humanity today into their plotlines. And we thought that was pretty strange.

So what did we find that’s airing now for viewers looking for something thought-provoking for their latest binge? Not a ton – but that’s not to say what is out there isn’t pretty great. (And yes, we’re deliberately ignoring Jesse Eisenberg’s cringe-worthy activist cameo on Modern Family for the sake of all humanity.)

OK. So right up top, having just gotten done wagging our proverbial finger at the TV industry for its lack of attention to this crisis, we’re the first to admit that it’s kind of incredible that one of the biggest TV shows is pretty much one great big allegory for the threat we all face from climate change.

Among the myriad fan theories about the political themes in HBO’s Game of Thrones, the one that’s long held the most weight was recently backed up by none other than George R.R. Martin, author of the A Song of Ice and Fire book series on which the show is based. Late last year, in an interview with New York Times Magazine, the writer laid bare the “great parallel” between his fantasy epic and our modern climate crisis:

“The people in Westeros are fighting their individual battles over power and status and wealth. And those are so distracting them that they’re ignoring the threat of ‘winter is coming,’ which has the potential to destroy all of them and to destroy their world. And there is a great parallel there to, I think, what I see this planet doing here, where we’re fighting our own battles. We’re fighting over issues, important issues, mind you — foreign policy, domestic policy, civil rights, social responsibility, social justice. All of these things are important. But while we’re tearing ourselves apart over this and expending so much energy, there exists this threat of climate change… And it really has the potential to destroy our world.”

The good folks at Vox even put together a terrific, concise video explaining the connection:

This popular (it’s just wrapped up its eleventh season last month) National Geographic docu-series follows the lives of several remote Alaskans as they deal with the daily pressures and very hard work of living a subsistence lifestyle in the Arctic.

Throughout the show’s run, we’ve watched its cast of characters grow and change – special shout out here to Jessie Holmes, who’s gone from struggling to make his way in early episodes to recently placing seventh in the Iditarod – yet, we hear again and again about how the Arctic they call home is also changing… and not for the better.

From melting permafrost, unseasonal warmth, and flooding to the increasingly erratic migration patterns of the numerous animal species they rely on for survival, nearly every character on the show has at one time or another (and often more than once) spoken of the impact warmer temperatures and changing seasons are having on their lives.

These observations hit especially hard coming from native Alaskan Agnes Hailstone, who lives with her husband and their children in Noorvik, Alaska, just a few miles south of the Arctic Circle. When Agnes, an indigenous Inupiaq whose ancestors have fished and hunted the Alaskan wilds for countless generations, worries where the caribou are or why the fish aren’t running like they used to, it’s especially ominous.

After all, her beloved mother (and hers before her on down the line) taught her how to survive in an Arctic that just doesn’t exist anymore.

This critically acclaimed Norwegian political thriller – available in the US and many other countries on Netflix – is a set in a near-future “cleantech-minded Norway held hostage by Russian and EU oil interests” (via Grist). That’s one heck of a hook!

The reason for the hostage situation? The newly elected, pro-environment Norwegian government goes all-in on renewables to fight climate change, halting oil and gas production in the North Sea. What unfolds is part high-stakes political drama, part study of gender and power, and part action thriller. And a lot of highly compelling television.

Watching Occupied, we see the Russian occupation become a broader metaphor for the role of fossil fuels in our lives. As the show suggests, we are all living lives occupied by fossil fuels, forcing us into decisions and down paths none of us would have chosen – it’s right there in the title.

But what pushes Occupied over the line from “good” to “great” isn’t just how clearly the series captures the creeping tyranny of fossil fuels. It’s also how every episode makes the tensions between our ideals and actual actions felt at a skin-tingling visceral level, prodding us at home with one simple question: “What would you do?”

Created by legendary Norwegian crime writer Jo Nesbø, Occupied (Okkupert, in its native country) is the most expensive Norwegian television production ever. It’s also been renewed for a third season, but a debut date has not yet been announced.

That’s all we got.

But luckily, the dearth of tv shows tackling the climate crisis seems to be changing, if slowly.

TNT is turning director Bong Joon Ho’s brilliant film Snowpiercer – which we included on our list of 6 Must-See Movies About Climate Change – into a TV series. And Apple TV is working on an adaptation of Nathaniel Rich’s New York Times Magazine story, “Losing Earth: The Decade We Almost Stopped Climate Change,” about “efforts by a number of top scientists, activists, and politicians to stop climate change in the 1980s.”

And that’s great to hear, because as Sara Poirier, an educational consultant on tv shows, writes for Yale Climate Connections, TV can play an outsized role in helping vast masses of people understand climate change a little better: “Television remains a leading source of informal education. It’s also a promising vehicle for climate change communication as it can place the issue in an entertaining and informal context, while leveraging the power of visuals.”

Indeed, because this crisis touches every one of us – and because we need to take urgent action now to end it – we should be talking about everywhere. On television. At the movies. On podcasts. In books. Everywhere.

But you know where it’s especially important for factual information about the climate crisis to appear?

On the website of the US Environmental Protection Agency (EPA), for crying out loud.

Two years ago, in the spring of 2017, EPA erased the words “climate change” widely across its website. Led by a longtime friend of fossil fuels, EPA’s goal was clear: Hide the climate crisis from us so the oil, coal, and gas companies most responsible for it could keep making billions.

But making the words vanish didn’t make the crisis disappear.

And now we’re fighting back.

It’s time to tell EPA to stop trying to hide the truth, and put the facts about climate change front and center on EPA.gov now.

This article was originally published by Climate Reality Project

At Climate Reality, we work hard to create high-quality educational content like blogs, e-books, videos, and more to empower people all over the world to fight for climate solutions and stand together to drive the change we need. We are a nonprofit organization that believes there is hope in unity, and that together, we can build a safe, sustainable future.

But we can’t do it without your help.

If you enjoyed what you’ve just read and would like to see more, please consider making a generous gift to support our ongoing work to fight climate denial and support solutions.

It might not always hit its visual marks, but the originality of the story won Liam Maguren over.

New Zealand hasn’t created a film quite like Mosley. Though it’s the third animated feature made in Aotearoa, it wouldn’t make sense to compare this family flick to Murray Ball’s irreverent phenomenon Footrot Flats: The Dog’s Tale or Leanne Pooley’s ANZAC doco 25 April. It’s an all-ages adventure squarely focused on a story writer-director Kirby Atkins has been waiting two decades to tell—and it’s one worth telling.

The tale centres on Thoriphants, horse-sized elephant-like creatures that can speak and comprehend human language. However, these greedy humans value their brawn over their brains, forcing Thoriphants into lives of servitude and, in Mosley’s case, backbreaking labour on a farm.

Sounds pretty heavy for a children’s movie, but rest assured that they get the most heartbreaking moment out of the way in the opening minutes. (Be prepared, though: it’s a Bambi-level gut-punch.)

Voiced by Atkins himself, Mosley is a fairly run-of-the-mill hero placed in a situation more compelling than his personality. He’s only known farm life, so for the sake of his child and pregnant partner, he keeps his head down and the fields ploughed. At first, he doesn’t want to learn more about the tales of historical Thoriphants that stood upright in fear of disrupting his merciless routine. But when he’s forced to run, Mosley goes in search for their help. 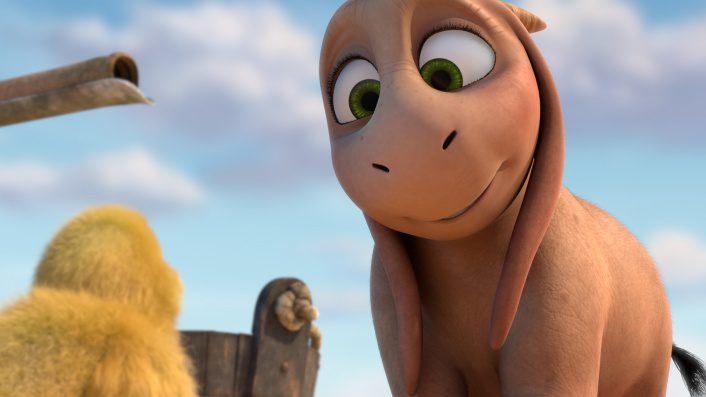 As the journey unravels, Mosley‘s real-world parallels become clearer. Perhaps the most invigorating comes from the story’s emphasis on whakapapa and how learning one’s cultural background grants them a certain strength. There’s also a plea to move away from disrespecting nature for the sake of profit—a timely moral given the current climate crisis. Mosley doesn’t get automatic praise for simply tackling these complicated ideas though; it earns praise for making them easy to understand in an enjoyable adventure setting.

Unfortunately, the art direction doesn’t always live up to the story’s power. While it’s easy to forgive technical grunt that doesn’t quite match blockbuster studios like Disney and DreamWorks, certain design choices and colour palettes come off a little bland—especially the farm with its vapid sense of space and overwhelming use of oranges and browns.

Though Mosley makes for a mixed bag of visuals, it gets the most important job done: servicing the story. With the current state of children’s cinema clogged up with merchandise tie-ins (I’m glaring at you, UglyDolls), seeing something as original as a Mosley movie caresses a cynical heart.

This article by Liam Maguren was originally published on flicks.co.nz