How to get to Middle-earth

With the release of the first Lord of the Rings film in 2001, New Zealand was suddenly thrust on the travel radar for a whole new generation. Its beautiful landscapes from bubbling brooks to snow-capped peaks and lush forest valleys are the perfect setting for Peter Jackson’s vision of Middle-earth, and now tourism is New Zealand’s second-largest industry.

The Hobbiton set is the country’s best-known attraction today with close to half a million visitors a year, but you can discover New Zealand’s dramatic film locations beyond ‘the Shire’ (over 150 were used during filming) for yourself, starting with this handy guide, or you can head to this remote country on a tour. Ahead of the new Lord of the Rings prequel TV series launching on Amazon Prime later this year, we’ve rounded up a few of the many operators running Tolkien tours of New Zealand, each for a different type of traveler. One thing they all have in common is the desire to meld real life with fantasy, while exploring one of the world’s most beautiful countries.

Be a Middle-earth explorer

You can follow in the footsteps of Frodo and Bilbo with Round the World Experts on a 17-day tour of all things Lord of the Rings. As well as the obligatory visit to Hobbiton, the tour takes you to Wellington for a Lord of the Rings location tour. Next, it’s on to filming locations in the South Island, with highlights including exploring Aoraki (Mount Cook), New Zealand’s highest mountain peak, discovering Queenstown, and experiencing the silence of Middle-earth on an overnight Milford Sound cruise. 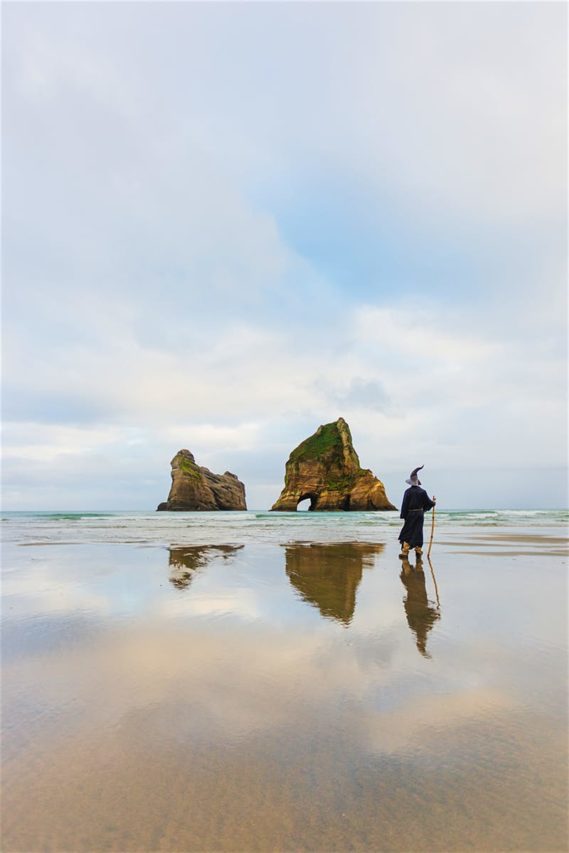 A 21-day tour with Discover the World takes die-hard fans through Lord of the Rings film locations on a self-drive holiday. The itinerary starts with a visit to Hobbiton in the rolling hills of Matamata, then hits all the visual splendor of the films, including the stunning beaches at the top of the South Island as well as the dramatic scenery of Fox Glacier, one of the world’s most accessible glaciers. There are several guided location tours included, as well as an overnight cruise on the spectacular Doubtful Sound. One of the most Instagrammed sites in New Zealand, the Hobbiton set © PC Agency

Silverfern does a 16-day journey traveling through New Zealand’s magnificent landscapes from Auckland down to Queenstown. The tour includes film locations across the country, with a few surprises like dinner at the Green Dragon Inn in Hobbiton; and a hike to Pinnacle Ridge in the heights of Mount Ruapehu, which stands in for Mordor.

Lord it up on a luxury tour

Luxury travel outfit Zicasso covers similar territory but includes a private, after-hours tour of the Weta Cave as well as off-road adventures in 4WD to Middle-earth film locations. A visit to the North Island is never complete without touring the steaming mud pools and erupting geysers at Rotorua‘s Wai-O-Tapu and Waimangu for more Lord of the Rings-style photo opportunities. This guided tour then heads to the South Island to jet-boat past mountains and waterfalls on the glacier-fed Arrow River near Wanaka. Finally, take a helicopter ride over the Fox and Franz Josef and pretend you’re flying over Caradhras, one of the Three Mountains of Moria.

The original article was originally published in December 2016, last updated in July 2019.

Tasmin Waby is a writer for Lonely Planet

You May Also Like: Climate Change and the 10-Year Challenge by NZ Author Nicola Patrick