The Primary Concern: A Better Way to Hold Primaries

Welcome to our weekly breakdown of political issues within a post-partisan context that puts our well-being over political loyalty, today’s topic is primaries.

TL;DR: A Better Way To Primary

The way we choose presidential nominees is like using a flip phone in the iPhone era. Statewide elections held at different times that require voters to pick one candidate lead to shitty outcomes. Don’t fret, there is a way to make primaries sexy: have each state vote on the same day using ranked-choice voting.

Honestly, it’s a mess. In simple terms, delegates are chosen by the voters, and the candidate with the most delegates wins. Voters chose delegates in state primaries which are held over the course of four months from Feb to June.

Alas, it’s not that clean (of course), because how states do delegates is weird. First, the number of delegates a state gets to award is based on population and voter turnout (weird). You can also get “bonus” delegates if you hold an election the same day as other states (hence “Super Tuesday” where 14 states held their primary on March 3rd). Some state delegates are awarded based on how districts within the state voted while others are awarded based on how the state voted overall.

Here’s a great breakdown of the primary process.

If no candidate has been awarded more than 50% of delegates by the end of primaries, the Democrats have a sketchy tiebreaker process using super delegates. Super delegates are roughly 400 party elites (wealthy donors, former politicians, etc.) who get to award 15% of all delegates to whoever they want to. This last happened in 1952.

The main ways in which primaries are flawed:

People don’t vote for who they think is best.

We are more likely to vote for the candidate who other people voted for, rather than who we individually think is best. We do this because social influence undermines our ability to make independent decisions. When we learn lots of other people made a specific decision, like voting for Joe Biden, we become far more likely to vote for Biden. This is a well-studied behavior in humans. Having states vote at different times amplifies this effect.

Staggering when states vote for candidates leads to fewer choices for voters in later-voting states. Voters in South Carolina had 12 options in the Democratic primary. Only three Democratic candidates for President are still running. This is after less than half the states have held their primaries. Approximately 2 million ballots were cast in the Democratic primary in advance of their state’s election day in various states. Judging from polls, somewhere between one-eighth and one-fifth of these voters chose Amy Klobuchar or Pete Buttigieg, and then learned that their favorite had dropped out of the race after they sent in their ballot. In other words, at least 240,000 people’s votes around the country now don’t count. Woof.

Less than 30% of eligible voters vote in primary elections. Our guess, is voters don’t feel like spending their valuable time participating in something that doesn’t make sense to them. 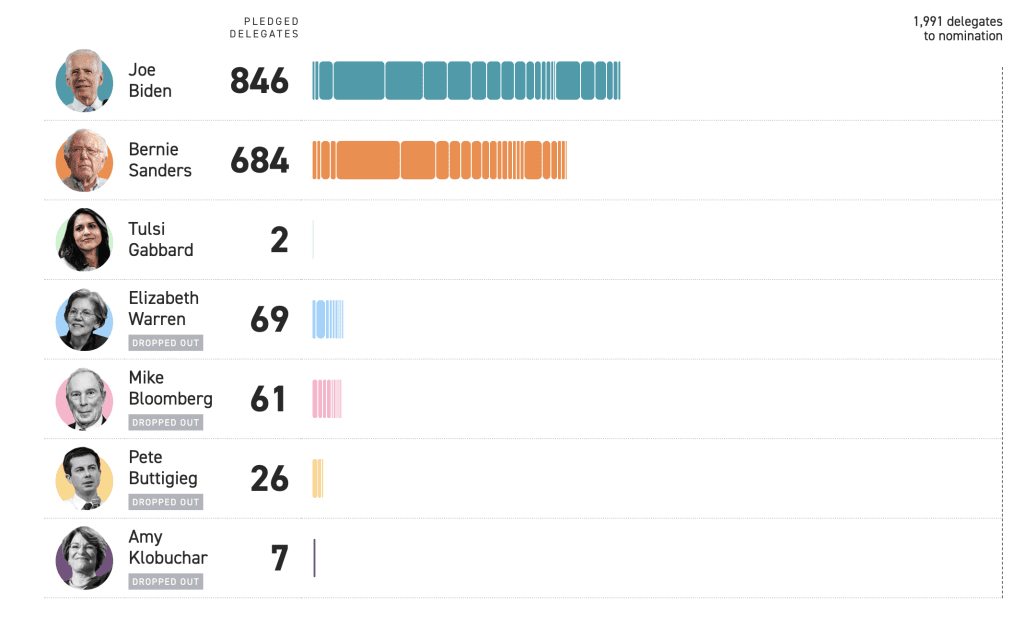 The confusing, drawn-out way we do primaries ain’t a good look, but there’s hope. What is sexy is using ranked-choice voting where each state votes on the same day and voters rank candidates in order of preference.

Voters rank candidates in order of preference. If no candidate receives a majority of first-choice votes, the last-place candidate is eliminated and those who marked that candidate as No. 1 get their second choice counted instead. That can go on for several rounds until a candidate emerges with a majority. People vote for who they think is best

We increase the likelihood people vote for who they think is best by having every state vote on the same day. Voters won’t see the results of other states and be influenced by whose winning elsewhere.

Voting on the same day means all voters across the country would get the same candidate choices rather than candidates dropping out after early state results.

Ranked-choice voting ensures that people have at least one of their preferences counted in the final tally. Also, voting on the same day ensures no candidates are on the ballot that is no longer running.

By increasing turnout and incentivizing candidates to earn second place ranks by voters leads to a reduction in polarization in elections using ranked-choice voting.

Sounds too good, why aren’t we using it?

The people in power were elected using the current system, so they are scared of something new. It’s like that friend who refuses to download the latest Apple update…their battery drains super quick and their apps don’t work, but they’re too scared of change to update.

The operating system of our democracy is outdated, we need an #upgrade.

What can I do about it?

Glad you asked. On the ChangeRoots app, we calculate a post-partisan score for each politician. Politicians who support ranked-choice voting get mad points. So, go to the app, find politicians with a good score, show them some love by micro-donating to their campaign.